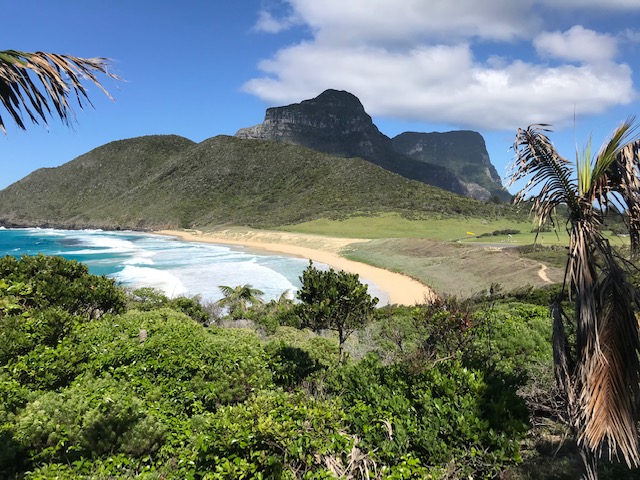 From an initial nine expressions of interest and six entries we had four boats participate in the cruise to Lord Howe Island over Easter and Anzac Day holidays in 2019. Walkabout II, a Halberg Rassy 45, departed a few days ahead of the rest. It was feast or famine with either light winds or strong squalls for the front runner. Water Music, a Catalina Morgan 440, left the Seaway on Wednesday morning, Nicky C, a Schionning Cosmos 1430 catamaran on Wednesday evening and Amy J, a Moody 336S on Thursday evening. These three vessels experienced only moderate conditions but unfortunately both swell and wind were coming directly from Lord
Howe Island so the 400-mile rhumb line turned into a 500+ mile beat to windward taking from 2.5 to 4 days at sea.

All vessels had been pre-allocated a mooring by the Lord Howe Island board. The charts of the island are a bit disconcerting, with shallow soundings throughout the lagoon, and the local supply vessel sits on the bottom alongside the jetty at low tide. The moorings however are all located in areas of ample depth up to 4m. The issue is navigating through the shallower areas to get to the moorings which is only possible for an hour or so either side of high tide. The local policeman knows the relevant depths at all points of tide and was brilliant in assisting vessels to their moorings. He parked his squad car on the beach with lights flashing to act as a leading light and talked the boats in on VHF. We were all very grateful for his assistance. There is a small amount of swell that enters the lagoon, particularly near high tide, but the mooring was not at all uncomfortable. It is a few hundred metres to the beach, jetty or boat ramp by tender. There are free toilets, showers and a washing machine for use by visiting yachties. Water is available at the jetty and diesel is delivered to the jetty on request.

The people on Lord Howe Island are absolutely delightful, friendly and helpful. A locksmith would go broke for lack of business. Jerry cans of diesel are left unmolested on the jetty for collection by the various fishing boats (and visiting yachts). Bicycles, helmets and bags are left leaning up against a pole and are still there the next day. Surfboards are left lying un-pilfered on the dunes. Nothing is too much trouble for the locals. The crew of Amy J accidently stumbled into a private residence one night while looking for a restaurant. The residents not only took them to that restaurant but when it was found to be closed for the night offered them a meal in their own home. The policeman lent one of our boats some water jerry cans to replenish water supplies. When we picked up a fly-in from the airport and started walking back we were immediately given a ride by one of the locals.

The island is only about 11x2km in size but all the population and infrastructure is concentrated in a couple of square km. Most people get around by bicycle or walking. You can hire a car but with only about 5km of roads there didn’t seem much point. There are several great day walks which you can do yourself or utilise a local guide if you wish. (A guide is mandatory if you wish to brave the 8-hour climb of Mt Gower). At Ned’s Beach you can stand ankle-deep in water and have hundreds of fish (and the odd Galapagos Shark) milling around your feet. There are fishing charters, a dive company, glass bottom boat tours, rambles, bird-watching,
snorkelling, fishing shops, boutiques, and museum. A golf course and bowls club round out the available activities. For a small island with a population of only a few hundred, there is a surprisingly good selection of good quality restaurants, shops and cafes.

The weather on Lord Howe was much nicer than in Moreton Bay at the same time. We did get about two minutes of rain but otherwise it was gloriously sunny skies and warm temperatures.

Walkabout II, having arrived earlier than the rest, also departed before the rest of the fleet after sharing one meal together. Their trip home was a glorious 10- 15 knot reach with the apparent sitting at about 120 respective to the boat, until about 8 hours out of the seaway the wind dropped to 6-10 knots so they motor sailed the rest of the way The rest of us shared a number of meals together over the next few days at restaurants and on-board Nicky C. Prices in the shops and restaurants are neither cheap nor extortionate, and the food was plentiful, fresh and delicious. There is no mobile phone coverage so most communication is done with land lines or VHF. I tried to book a restaurant by leaving a voicemail message. The policeman called me up later that day on VHF to report that unfortunately the restaurant was booked out that day. There are a couple of wi-fi hotspots allowing those who were desperate for election campaign news to log on and satisfy their cravings but most of us were happy to remain ignorant of such things.

The crews spent the morning of Anzac Day either getting in one last snorkel or joining the rest of the island for the Anzac Day march and service. High tide was 1pm and all three vessels departed within an hour of each other. After an upwind sail on the outward journey we were all looking forwards to a glorious spinnaker run down the rhumb line home. Unfortunately the wind chose to come around to the North and even North-West so spinnakers were left in the sail locker and it was a close hauled trip home just south of the desired course. Winds were initially around 10 knots on Thursday strengthening to 15-20 knots on Friday. During the early hours
of Saturday morning there was a sudden and moderately violent South-Easterly change. The seas between Cape Byron and Gold Coast Seaway might be generously described as “confused”. Nicky C lost autopilot on Friday and had to hand-steer all the way home. Water Music was shaken up by a rogue wave near Cape Byron and damaged their sat phone but otherwise the cruise was fairly uneventful in terms of gear failure and damage. Nicky C passed through the seaway 47 hours after leaving Lord Howe Island and the other two boats within a further 18 hours. Having departed Lord Howe Island on Thursday afternoon everyone was safe
home in smooth waters by Sunday.

The feedback I have received from the other participants has been very positive and it seems everyone found it an enjoyable and worthwhile experience. I have already had requests for a repeat next year. If I receive sufficient expressions of interest from others in the cruising group then this could be a real possibility.