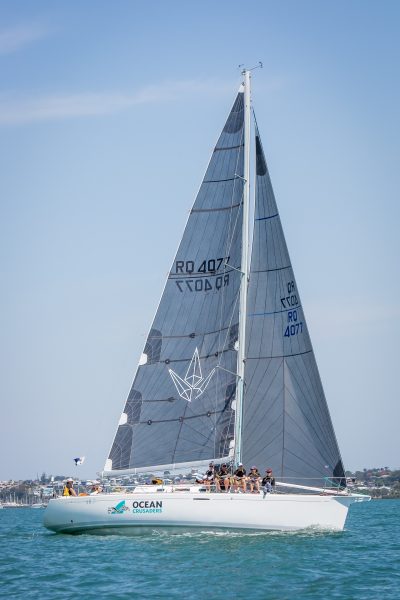 Ocean Crusaders Ian and Annika Thompson were interested in profiling their cause for cleaning the oceans by competing in this year’s Sydney to Hobart this will be the highlight of their summer cleaning campaign starting with  Sydney Harbour clean up just before Hobart and then a Derwent River clean up immediately after. Laura and I were interested in doing the race but needed some help with the commitment to get us to the line. With some of team OC’s sponsors assistance in some key areas we have been able to overcome the hurdles and are now fully locked in.  It will be an interesting crew of ten with equal boy girl ratio including three couples, trying to get them on opposite watches is going to be a challenge!!  Amongst the crew will also be my daughter Genevieve who last sailed with the Jessica Watson Hobart youth crew, Wendy Tuck of Whitbread round the World fame and Noel Patterson who will be doing his fourth Hobart. We have a group of Nth Qld and Darwinians filling up the ranks while they haven’t actually done a Hobart they have done plenty of Darwin Ambon races and will be joining us for the Sydney delivery.  All up we have over half the crew who have done Hobarts and I think last count we were at around 25 Hobarts on board.  The boat prep has been endless with extra pipe cots fitted, HF radio and Sat Phone fitted, full bank of new batteries, engine overhaul, mast out and full overhaul and beef up with any thing that looked dodgy, new sails added to the wardrobe and Cat 1 preparation and audit. The last thing just completed was the full bottom wet n Dry rub down before we leave for Sydney. We are now fully cocked and looking for to the trip to Sydney and good weather willing a great run to Hobart. We will bew racing as Ocean Crusaders if anyone wants to follow the journey.