A. STOP the source of the spill as quickly as possible and ALERT Marine staff immediately.

B. CONTAIN the spill by deploying floating booms. These booms have a “D” ring at each end to make them easy to set up and tie off to corral the leaking substance.  Make sure the spill can’t travel to other pens by using the smaller oil/fuel booms and stuffing them into the gaps between the docks. 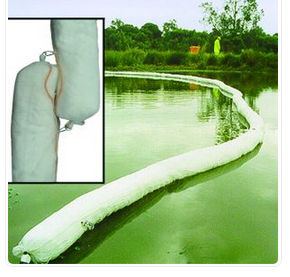 C. CLEAN UP Use the square white pads to collect the spilled liquid by making a layer on top of the water to cover the impacted area. These products are hydrophobic and will only absorb the spilled oil/fuel/diesel. Use a stick or rake to help move the pads into place on the surface of the water. Each pad will absorb 2L of spilled liquid. Let them sit until it looks like they are full of the spilled substance. Add more pads if necessary. 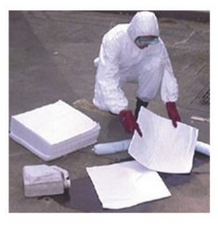 D. DISPOSE of the used pads in heavy duty collection bags provided in the red bins or heavy duty garbage bags and drop them into the large metal waste bins. Do not use plastic shopping bags as they are not strong enough. The pads have been tested and are proven to be environmentally safe, they will not release absorbed substances into land fill

E. EXPLAIN what has happened by reporting the details of the incident to the RQYS marina office. It’s important for the RQYS to know what is going into the marina waters as we operate under an environmental license and our Environmental Management System has policies that relate to spills and clean up.  Additionally, the RQYS holds a current Clean Marina Program Level 3 Accreditation that is an initiative of the Marina Industries Association and is an independently audited program. 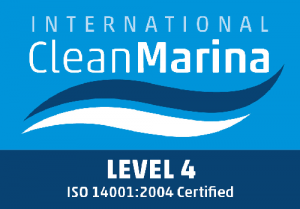 F. FLOAT your ideas of how things could be done better. As speed is key to minimising the effects of a spill, would having pads and booms available on your own boat make containing the spill product faster?   The spill containment and clean up products shown in this article are located at the top of ramps across the marina.

What do you do if there is a spill on land?  Use the same materials or the mineral sponge that is also in the bins and comes in a bag and can be easily spread onto the spilled material. 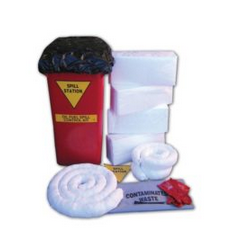 Whether your boat is large or small, it is an offence to deliberately discharge oil or chemicals into Queensland’s coastal waters. Under the Transport Operations (Marine Pollution) Act 1995 severe penalties apply. Not only can Oil and chemicals be toxic to marine and human life, but significant penalties can apply.

Last month, the RQYS Marina Office received a report of what appeared to be oil or fuel in the water between J/K and L/M rows.  The spill was reported to Marina Administration and the RQYS spill protocol was enacted.

Staff were deployed to the scene and made an assessment that there was a significant uncontained release of oil (estimated at between 15 and 20 litres of oil). Utilising resources held on site for such an eventuality staff contained and then commenced cleaning up the spill.

Containment included placing a boom around the boat from which the oil had been discharged and using smaller booms (snakes) to plug between the marina pontoons to stop the spill from spreading. Clean-up involved the spreading of a couple of hundred absorbent pads around through the affected area to mop up the oil. Overall some $2500 worth of products and over 20 hours of staff labour were utilised to contain the spill then clean it up.

The Squadron was fortunate that we invested in having staff trained in spill control methods, and that the spill was able to be contained quickly thus the potential for environmental impact to the marina waters or damage to moored boats was greatly reduced. In addition to staff we were able to call on the services of one of our volunteers who not only lives nearby but has extensive industry experience in the area of spill response. Throughout the clean-up communication was had with the relevant State Government Departments, informing them of the details of the spill, our response and the results of our clean-up.

What was the REAL cause?  The source of the spill was identified as oil that had collected in the bilge and released into the marina as a result of a vessel owner washing down his boat whilst having the automatic bilge pump on.  Allowing oil to collect in the bilge over time meant that a simple action such as washing down a boat created the perfect conditions for a release.  The most common causes of water pollution in marinas include spillage of cleaning agents during boat maintenance, refuelling and bilge discharges, which may occur when oil accumulates along with water in the bottom-most compartment of a boat and then gets pumped out if the automatic bilge pump is activated.

What’s the REAL cost of having a spill?

Prevention is better than the cure.  Do you have an engine that’s a notorious leaker?  Ensure the leaks are contained and kept from damaging your boat and possibly releasing into the water by collecting it as soon as the leak occurs.  Using products such as oil/fuel pads, bilge rats or a small spill tray with absorbent pads inside is a great way to avoid an accidental release.

If your bilge/engine compartment has oil/fuel/diesel in the hold, clean it up before water gets in, be proactive with regard to releases into the harbour and our beautiful pristine waters.