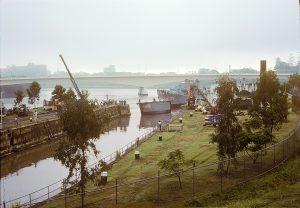 The last voyage of the Diamantina – early on the damp morning of 4 April 1981, the caisson of South Brisbane Dry Dock is carefully withdrawn to allow the 300 foot, 1,400 ton retired frigate entry into her new home at the Queensland Maritime Museum.
(Construction of the South Brisbane Dry Dock (formally known as the Brisbane Graving Dock) commenced in January 1876 and it was officially opened on 10 September 1881. It closed in 1972. The Queensland Maritime Museum opened on the site of the old Dry Dock in 1980.)