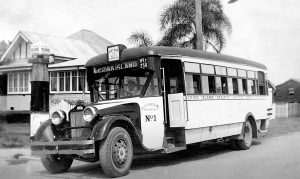 Bev Gant: ‘Cribb Island was originally named after John George Cribb, a Brisbane banker and later businessman (of Cribb and Foote fame) who in 1863 purchased 150 acres of low-lying land bordering Moreton Bay just north of Serpentine Creek at the mouth of the Brisbane River. In 1886 Cribb sold 65 acres to James Jackson who went on to grow pineapples, bananas and watermelons there.’
Tom Gibson: ‘During WWII, the Cribb Island buses could be commandeered at any time by the American Army forces, which were then billeted at Eagle Farm racecourse. If objections were raised, the army just threatened to send out drivers and take over themselves. Alex Gibson (the bus proprietor) had no option but to comply, and borrowed buses from J.T.Ford of Sandgate and Hornibrook Highway to try to get his disgruntled passengers to and from their homes.’