PL10 Maid of Sker preserved at a park in Nerang. 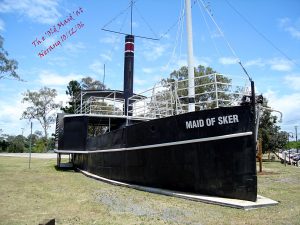 An oyster boat used by the Moreton Bay Oyster Company around 1920 was called the “Hero” and it was powered by a single cylinder Wilson kerosene engine that was to be used sparingly. The main propulsion was by sail and oars, with 16-foot (5 metre) sweeps, rowed in a standing position from a catwalk. On one occasion, when returning from Tulleen Island, they encountered the paddle wheeler “Maid of Sker” aground on a mudbank. As the “Hero” was empty, they unloaded the cargo from the “Maid of Sker” onto the “Hero” and got her floated again. The next time they passed one another, the “Maid of Sker”’s skipper put two £1 notes (the equivalent of four dollars in today’s money but a more sizeable amount then) into a bottle and threw it into the water, to be picked up by the oyster boat and divided amongst the crew, in appreciation by the owners of the services rendered.