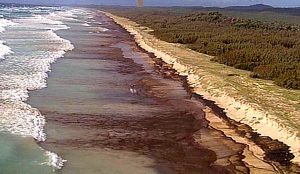 On 10th March 2009, the Swire vessel Pacific Adventurer reported losing 31 shipping containers overboard, some 12 miles east of Moreton Island. The ship had reported striking the containers when they went over the side, and puncturing the heavy oil fuel tanks on the vessel. This resulted in 250 tonnes of heavy fuel oil being spilled into the ocean and washing ashore – 25km of beach on Moreton Island were impacted and another 5km of beach on the Sunshine Coast also spoiled by the oil washing up on the beach.
During the next two months, there were over 2200 people deployed to Moreton Island, with up to 400 staff working on the beaches collecting oil waste from the spill on some days. All work was manual, using shovels and rakes to collect the waste and place it into bags and waste bins. They were able to clean the 25km of beach, removing more than 4000 tonnes of oily waste and returning the Island to its natural beauty well ahead of predicted time. The beaches were declared open again on 11th May 2009, and no oil has reappeared since.