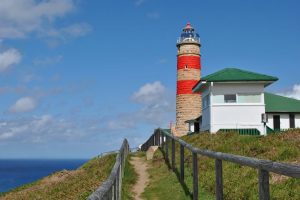 During 1856, with vessels now entering Moreton Bay via the northern entrance between Bribie and Moreton Islands, the New South Wales Government erected the Cape Moreton lighthouse, a stone tower 23 metres high and 120 metres above sea level. This lighthouse, with its original lens, is still in use.
The stone for the lighthouse and the light keepers’ cottages was quarried at first from the immediate neighbourhood of the works, but it was found to be of bad quality underneath the hard top and the remainder was obtained from a nearby hill. The lantern was of iron with 16 sides. The government schooner Spitfire carried the lantern and many of the other items for the lighthouse from Brisbane to Moreton Island, landing them at the pilot station (at Yellow Patch) whence they were transported overland to the site. Such an important and interesting event did the operations of the new light prove to be that pleasure cruises to view the lighthouse were run on the (paddle) steamer Breadalbane, taking about 100 passengers from Ipswich and Brisbane, with music and dancing enjoyed on board while in the river.