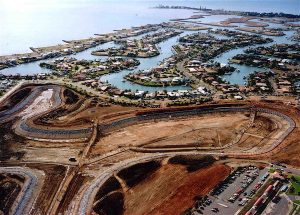 Raby Bay, situated between Cleveland Point and Ormiston, was named after the Duke of Cleveland who was also known as Baron Raby. In June 1979 the Queensland Government approved a canal estate development in Raby Bay which would expand the suburb of Cleveland into the bay, much to the consternation of Moreton Bay’s environmentalists. Construction commenced in 1983 and the first stage was officially opened on 23 November 1984 with 158 blocks to be sold at prices between $53,000 to $96,000 each.