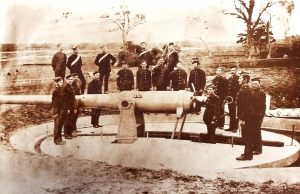 A more tangible remnant of our past is to be found at Fort Lytton, built in the late 1800s to defend the Bay against a feared Russian invasion, that never came. The fort was located at the mouth of the Brisbane River, and was designed to deny enemy vessels access to the river and its port.
Fort Lytton had two 6-inch Armstrong disappearing guns mounted in gun pits #1 and #2. Both guns were manufactured in 1886 and mounted at Fort Lytton in 1888. This photo appears to be gun pit #2. Both guns were dismounted in 1938.
Ron Williams: ‘I remember too that in the 1930s the army had camps at Fort Lytton where they would practice fire the cannon across the Boat Passage out towards St Helena. Quite a lot of the shells would end up in the mudflats at Wynnum. One of our childhood pastimes was to look for the artillery shells buried there.’