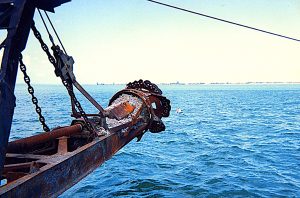 Ralph Munro: ‘When I joined Queensland Cement they were working from Ormiston and dredging coral from Raby Bay. We had our own private island, which we accessed via a causeway from the road next to the little church just down from Ormiston House. The island was formed from ironstone that was pumped up while they were dredging. All the coral sent up river to make the cement used in the Gateway Bridge came from Raby Bay. We kept the dredging going for five years to get the stockpile up to build the gateway bridge. We put the old dredge Kawana into use for two years while the new dredge Amity was being built. The loading barge for it was the John Oxley, which could carry three and a half thousand tons. We used the tide to help the tug take the barges upstream. By dredging at low tide, the tug would get the tide helping all the way up the Brisbane River to Darra and on the outgoing tide she would take the empty barge back to Raby Bay.’