Sailors on the Hamilton Reach in the late 1970s 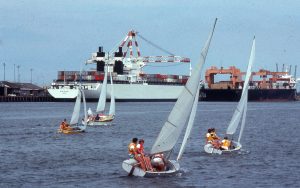 Coastwatch’s Ken Brown remembers: ‘Another thing that I think is really sad that’s missing now from the Brisbane River, is the sailing. You know, when everyone was coming home with spinnakers up, the Brisbane River was just fantastic. It was the workingman’s sport. In the wintertime they played footy; in the summertime, if they weren’t playing cricket they went sailing. Of course, the guys that had a bit of money had boats, but a lot were built under people’s houses. It was the workingman’s sport and there was a huge following, with spectator boats taking people out to watch it.
‘I think Brisbane lost part of its identity when the sailing clubs moved away from the river, and I really would love to see it again. If there’s anybody out there reading this that wants to do something really neat for Brisbane, work out a way to bring sailing back onto the river, and our river will come back to life again.’