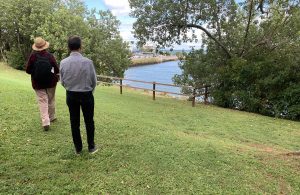 The Dunwich convict causeway at Dunwich (Goompi) was constructed in 1827 as part of a military and stores depot servicing the recently established Moreton Bay penal settlement. A sandbar at the mouth of the Brisbane River meant it was impossible for large vessels to carry goods into Brisbane. Consequently, ships unloaded cargoes at Dunwich and smaller cutters carried the goods across the Bay, over the bar and on to the settlement. Armed conflict most prominent in 1831-1832 led to the withdrawal of the garrison. Following its closure in 1831 the causeway continued to service subsequent developments at Dunwich including a Catholic mission (1843-1847); quarantine station (1850-1864) and the Dunwich Benevolent Asylum (1864-1947). Today the causeway is an integral part of the barge and water taxi landing facilities and has established Dunwich as the gateway to North Stradbroke Island.