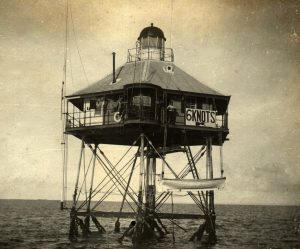 There were three levels: living, storage in the roof, the light itself. The structure contained six rooms of equal dimensions and housed three persons. It was set on a large platform supported on a steel frame some ten metres above the water. The light’s crew worked three weeks on and one week off. Each provided their own food, which was delivered weekly when the supply boat came to change shift. Rainwater was collected from the roof in a tank. The lighthouse fulfilled two functions. The first was to mark the seaward entrance to the port of Brisbane. The second function was to record and signal the state of the tides to the passing ships. Different colours were designated to specific levels of the tide and changed manually. Floats in tubes attached to graphs recorded the tides and, when replaced every 31 days, the results were sent to Greenwich for keeping.