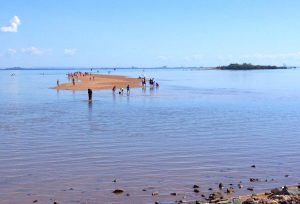 The Phillips family lived on tiny King Island, off Wellington Point from December 1904 until April 1906.Here Clarrie Phillips recalls a memory:
‘King Island was one of the best oyster banks in Moreton Bay and was reserved for the public. There were certain conditions to be observed. One was that no oysters were to be removed in their shell, but people were permitted to open them on the bank and place the oyster in a jar or similar container… The opened shells were then supposed to be taken close to the low water mark and scattered over a fair area. The shells apparently were very suitable for the embryo oyster to fasten onto and grow to maturity.’