Down the Bay on the showboats 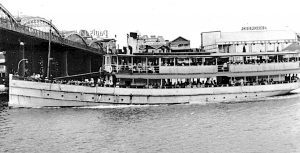 During the 1930s and 1940s, Jim Crouch, a member of Moreton Bay’s first European fishing family, ran show boats to the island from Brisbane. His son, Ted, offers these glimpses of life on the showboats …
“I was born in 1921 and as a kid I worked as a deckhand on my father’s boats. Jim Crouch started out fishing like the rest of his family but then changed to running pleasure boats such as the ‘Twilight’, ‘Radio’, ‘Gippsland’ and ‘Pat C’. He also had the ‘Vera’ – a steel-hulled craft which he used for towing gravel barges up and down the Brisbane River.”
The ‘Gippsland’ was owned jointly by Jim Crouch and Alex McGrath. Purchased from ‘down south’ this large (a least 100 foot) wooden hulled, steam driven craft was a popular show boat for cruises down the river to Moreton Bay in the late 1930s.
Eric King, a ten-year-old ice cream seller on the boat in that era remembers the ‘Gippsland’ as being the first boat to do the “100 mile trip” from Brisbane to the islands of South Moreton Bay, calling at Dunwich and the RKLM Group before returning to Brisbane.
The Chief Engineer on the ‘Gippsland’ from 1939 to 1941 was Cecil (‘Tom’) Cannon. In a reference written for him in 1940, Jim Crouch mentions that “the ‘Gippsland’ has replaced the Queensland Government Steamer ‘Otter’ in maintaining the service between Brisbane and Dunwich transporting all stores and passengers for the Department of Health and Home Affairs. In addition thereto the steamer has been chartered on many occasions by the Military for the transport of troops and materials to and from Cowan Cowan.”