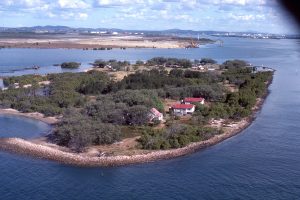 Kevin Mohr: ‘When the Pile Light was knocked over in 1949 the signal station was transferred to Bishop Island in about 1952 or 1953. It was only a temporary turnout there, but they still called the station at Bishop Island the Pile Light. The term ‘Pile Light’ was still in everyday use until late into the 1980s when it was finally discontinued because there was no such thing marked on the charts anymore. The signal station was at the northern end of Bishop Island, and nearby were the three signalmen’s houses – the Ford, Tottenham, and Devonshire families.
‘To get our tucker, we had wheelbarrows, which we used to take up to the jetty at the other end of the island. The track was all sand but when the tide was out, we’d go via the mud flats because the mud was a bit harder at low tide. Every Tuesday we’d go up for our provisions. Also at the other end of the island was a kiosk and we had quite a bit to do with the people who ran that for the tourists. Harry Sullivan and his family had it when we were there.’