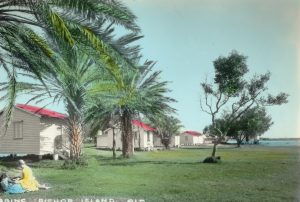 At the end of World War II in 1945, Harry Sullivan embarked on a new venture when he bought the lease from the Crouch family for Bishop Island at the mouth of the Brisbane River. His wife, Beulah, and daughter, Margaret, had been helping with the boats (in fact they were probably the first mother and daughter team in Australia to each hold a Master’s Ticket). With the purchase of the Bishop Island lease, Beulah built their first holiday cabins there. They were ex-army, and could be hired for 30/- ($3.00) a weekend or £7 ($14) a week. About 1960 Harry Sullivan sold the Bishop Island lease to his son in law, Pete Taylor and wife Margaret. Pete recalls:
‘I was incensed one day by a remark from a tourist who asked me if the cabins on Bishop Island were there when Captain Cook discovered Australia, so I set about rebuilding the place. This included a new kiosk, dance hall, cabins, shelter sheds, and the installation of 240 volt power. We built a mini golf course and had septic tanks installed. We also had Neil Todkill build us a new jetty.’