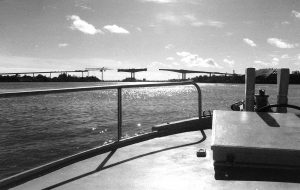 Construction on the Gateway Bridge commenced on 5 June 1980. The construction of the bridge started before the design was completed, to fast track its construction. It was officially commissioned on 11 January 1986. On this day 200,000 people crossed the bridge by foot as part of the opening activities. The duplicate bridge was completed in May 2010 along with the remaining lanes of the Gateway Motorway deviation. In February 2010, the Queensland Government renamed the Gateway Bridge and its duplicate the Sir Leo Hielscher Bridges, although most people continue to call it the Gateway Bridge.
(Sir Leo Hielscher retired on 30 June 2010 after 19 years as chairman of the Queensland Treasury Corporation. He has been acclaimed as one of the key figures responsible for transforming Queensland’s economy in the late 20th century and early 21st century.)