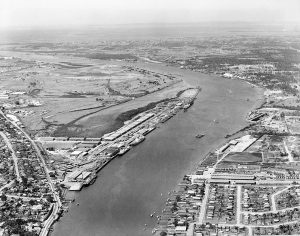 The effects on the Brisbane River and its shipping were profound. In 1939 the Commonwealth and State Governments co-operated with the firm of Evans Deakin & Co to set up the Evans Deakin shipyard at Kangaroo Point for the building of large ships. From 1941 the South Brisbane Dry Dock was used by the US as its submarine base and World War II blockhouse. In 1945 reclaimed land between Hamilton, the training wall, and the back water was extensively developed for the Royal Navy as a naval repair base. For the repair of American vessels too large to fit into the South Brisbane Dry Dock (e.g aircraft carriers) the Cairncross Dockyard was constructed on the Brisbane River opposite the Hamilton wharves. This was opened in 1944.