Wreck of the Pile Light 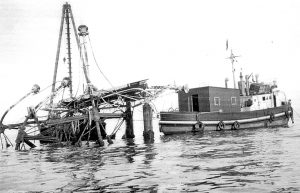 The end of the Pile Light came on 17 October 1949 when the 15,000 ton British tanker ‘Wave Protector’ failed to stop and crashed through the lighthouse. Its three inhabitants were thrown into the sea but escaped drowning when they were saved by the tanker’s crew. The damaged structure remained at its place until 1966/67, when it was removed by the barge ‘Hammerhead’.