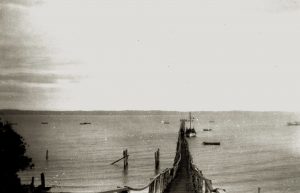 Black’s jetty was built around 1922 by William Black, the licensee of the Cleveland Hotel (now known as Cassim’s). The jetty ran east from below the hotel. Black probably built the jetty for his hotel guests. The jetty quickly became the main landing place for boats travelling to and from North Stradbroke Island and especially the Dunwich Benevolent Asylum and the Peel Island Leprosarium. When the hotel ceased trading in 1929, the Department of Health and Home Affairs entered into a formal arrangement with the building’s owner to lease the land leading to the jetty. It remained the main landing place until the Paxton St jetty was built ca 1950.