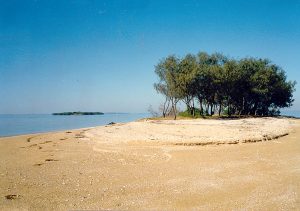 Bird Island is now just a memory, but it’s erosion must have been going on for some time for Rowland Snow Port to have reported: “Once in the 1920s while netting mullet with my father on the eastern side of Bird Island, we hauled in a lot of metal coffin hinges and handles in our nets.”
(When the quarantine station was in operation on Peel Island, it was reported that many of the victims of the more virulent strains of disease were buried on nearby Bird Island. Time and tide had evidently eroded the sand from the coffins, and rotted the wood, leaving only the metal hinges and handles).