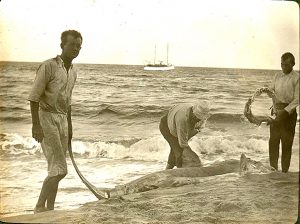 In earlier times, removing jaws from a shark catch was often used as a trophy to ‘go straight to the pool room’ (as Michael Caton would say), or it might have been to avenge our innate galeophobia (fear of sharks). Incidentally, the vessel in the background is James Love’s auxiliary ketch “Sweetheart” which was built for him by J.H. Whereat at Bulimba in 1911.
As a young boy, James’ son, Nim Love, remembered seeing the capture of this shark which when opened up was found to contain a young girl’s head. (Editor’s note: Although it is known that this incident followed the wreck of a vessel, the name of the vessel has not been recorded. Could this have been the girl that Captain Dudley Scott heard was taken by a shark at the wreck of the “St Paul” in 1914? Nim would have been eight years old then. I am inclined to think it was.)