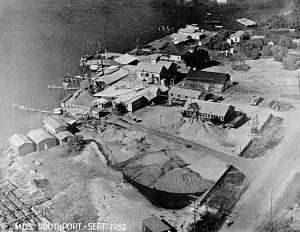 Frank Willoughby:”A depot was built by Scott Moffatt just before WWII alongside the Kleinschmidt’s at Southport to handle the mineral sand mined on the beaches from Broadbeach to Fingal. The depot was called MDS (Mineral Deposits Southport). They used to separate all their sand there. They had massive vibrating tables to separate out the sand and you couldn’t sit at the table in our house next door while they were working. Just after the war, Kleinschmidt’s started transporting mineral sand in bags from Dunwich to Southport using the “S’port”. After separation, the sand was sent back to Brisbane and over to Yankiland. The crew on the “S’port” was dad, Dot and Nancy Mackie. When this folded the MDS barge (owned by Riverside Coal) took over and this was towed by the “Ena” but it took too long and used to run aground. The channels used to change.”