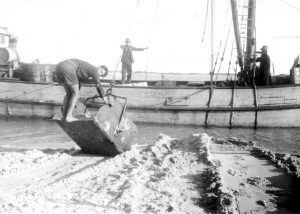 This was the term used for shovelling sand onto the “Florant” at the White Cliffs in the Canaipa Passage on Stradbroke Island. All the work was done by hand, even at night by the light of paint pots filled with burning dieseline. An added bonus for working at night was that the smoke kept the mozzies away. The ‘Florant’s days were to end at the White Cliffs when she caught fire and burnt there.
Sand shovelling was backbreaking work and was not for the faint-hearted. Indeed, sand shovelling championships were organised at Southport to see who could fill a truck the fastest. Graham Dillon was one of the champs. Best times were about 20 minutes for one man or 10 minutes for a two-man team. In original competitions, a keg of beer was the prize, but later prizes were chrome plated shovels.