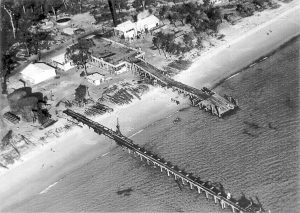 In 1952, Whale Products P/L opened a whaling station at Tangalooma. Quotas averaging 600 per year were met until 1959 when world whale oil prices began to fall due to competition from vegetable oils. The whaling station closed in 1962, and in 1963 the Tangalooma site was purchased by Greg Cavill and converted to a tourist resort. Today it continues as such with few reminders, save for the massive concrete flensing deck, of its former purpose.
Ron Farry adds: “During the 1950s, while the Tangalooma Whaling Station was in operation, a whale oil slick came right from Tangalooma across the bay into Nudgee Beach, a suburb next to Cribb Island. We used to watch the sharks’ fins going up and down the channel, just beyond the beach.”