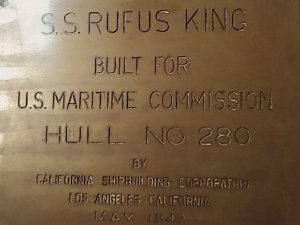 The vessel ‘Rufus King’ was an American Liberty Ship bound from Los Angeles to Brisbane and on July 7, 1942 was wrecked on the South Passage Bar. Hazel Kennedy recalls: “I lived at Amity during the war years. I was there when the “Rufus King” was wrecked. There was a lot of wreckage washed ashore which the locals picked up. I had some nice blouses made of sheets washed up from the wreck. Remember that this was wartime and materials were very scarce. It was mainly medical stuff which was washed ashore. Nearly all the men at Amity were sporting those red medical dressing gowns. There was also coffee which, being vacuum sealed, was still good.”